The Blaine Amendment and the Removal of the Ten Commandments

Posted by Matthew Vermillion 36sc on

Rep. J.P. Jordan will be discussing, HJR 1036 The Repeal of the Blaine Amendment 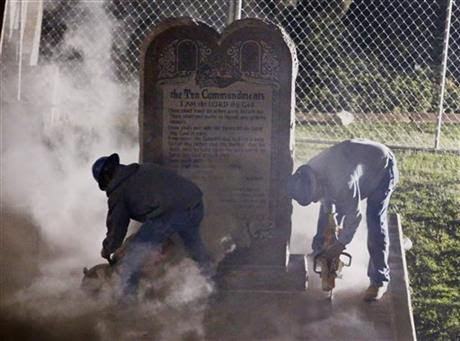 of the Ten Commandments monument from the grounds of the state capitol.

On June 30, the Oklahoma Supreme Court, in a 7-2 ruling, said the display of the Ten Commanments monument on the state Capitol grounds violated a provision in the state constitution prohibiting use of state property to further religions. Oklahoma County Judge Thomas Prince then ordered its removal by Oct. 12.

Lawmakers have argued that the monument, which was paid for with private money and installed in 2012, was not serving a religious purpose but was meant to mark a historical event.

In the dead of night on October 6, the monument was removed from the capitol grounds.